Kowloon Walled City is located in Kowloon City area. The city, with a wall originally made by stone, was 25,000 square meters in area. It was the largest slum in Hong Kong in the previous century.

Population in the city took a sharp rise after WWII, with as many as 50,000 people at one time, becoming the most densely populated area in the world. There were as many as 350 buildings on this 6-acre land, and lived 1,923,077 persons per square mile.

The history of the area can be dated back to Song Dynasty when Kowloon Bay was still a bay, and all sea vessels heading south from Lei Yu Mun would pass through the walled city, making it a maritime defense stronghold. The Qing Dynasty, beginning from Kangxi’s reign, started building a fort in the area, and further built a fortress in 1810. After the Opium War, this location had become even more important strategically. The city area was not included in the Convention between Great Britain and China Respecting the Extension of Hong Kong Territory, making it a Chinese territory within the British one. Qing officials still worked inside the city much like an embassy of today. But in reality, the Qing Dynasty, National Government later and after liberation by the Communist Party, China had not exercised its jurisdiction here. The area became a lawless enclave where neither the British, Chinese, nor Hong Kong government ruled. It became the nest for prostitution, gambling, drugs, unlicensed dentist and family-run small factories. It was the hideout for drug divans and criminals.

In 1987, the Chinese and British government came to an agreement to demolish the city. Work comprised of phases started in 1993, and the area was rebuilt as the park we see today in 1995.
Kowloon Walled City Park has preserved quite a few historic sites from its time as a maritime defense city, including the military inspectorate from Qing Dynasty, a canon made in 7th year of the reign of Jiaqing (the only batch of canons surviving in HK), South Gate, granite plague. The design of the park is in Jiangnan garden style from Qing Dynasty and is divided into 8 areas of different themes for visitors to experience its history.

“…Its (Kowloon Walled City) core importance lies in its demonstration of the extension of Chinese sovereignty, persistence of the British rule, revelation of Hong Kong people to politics, and the assertion of the rights of Cantonese people. …It is of pivotal importance to history of Hong Kong, cannot be overlooked in Chinese modern history, and an important case in the history of Sino-British relationship.” --Professor Wang Er Min, Historian

Remarks : public car parks are not available inside the Park 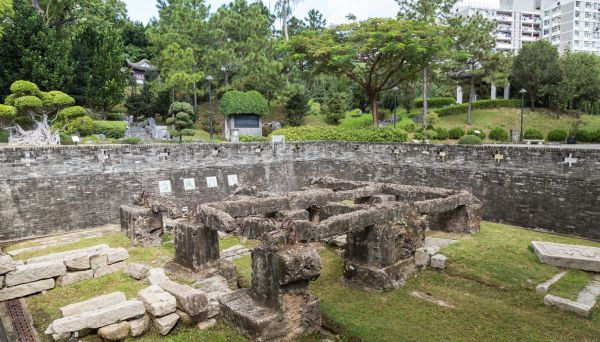