Built in Ming Dynasty, Kat Hung Wai is the best preserved and oldest “Wai” in Hong Kong. Constructed over 500 years ago, it had no walls until the early Qing Kangxi reign, when villagers saw the need of a wall to protect themselves from bandits. In its long history, the Iron Gate Incident, which happened in 1899 during the beginning of the colonial era, is worth noting. With the British forcing The Convention Between Great Britain and China Respecting an Extension of Hong Kong Territory upon Qing Dynasty to further colonize the New Territories as backdrop, residents of Kam Tin, unwilling to become the second-class citizen, rebelled the British army in Kut Hing Wai. They finally fell under the heavy artillery of the British with many casualties. After the British entered the walled city, they took the iron front gate and shipped it back to Britain. After repeated demands from the clan, the gate was finally returned to the villagers in 1929.

Though many of the structures are rebuilt in modern style, the canon towers and moat are still preserved, becoming the 2 famous sites of the walled village.
Opening Hours: no designated opening hours, but out of respect for villagers’ daily lives, day time visit with quiet manner is recommended. 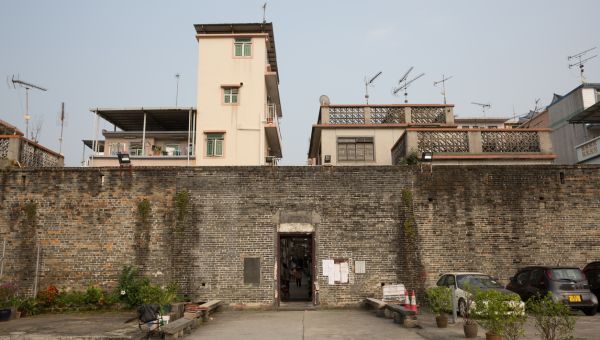