Soups are indispensable to the diet in the family. People nowadays work long hours and they also need to go out for social functions. So they may not be able to go home and for supper everyday. The children may have formed small families of their own and they will only return to their parents’ home for a meal during the holidays. When people know that family members come back for a meal, it is natural that a soup will be cooked.

When we dine out, we can drink soups from different places of origin and in different styles. When we go to a Chinese restaurant, there are long-boiled soups and stewed soups. In a western restaurant, there are cold and hot soups. Even in a fast food restaurant, there are soups of the day available. For the ladies, some of them will order soups for delivery when they are in the office. And there are shops specializing in soups too. However, many people think that these soups are no match for the soups made by family members with love and care because fresh ingredients are used and there is no MSG.

There are many ways of preparing a soup. In an ordinary family soups can be divided into long-boiled soups, boiled soups and stewed soups.

The ingredients are put into boiling water and boiled with high heat, then it is boiled in low heat for 2 to 3 hours so that the flavour and parts of the ingredients are dissolved into the soup. Ingredients such as red meat, fish, poultry, dried food, dried seafood, vegetables and herbs can all be used in preparing a long-boiled soup. Moreover, the ingredients used can vary with the seasons, like the ones which can clear away heat are used for spring and summer while moisturizing ones are used for autumn and winter. In this way, long-boiled soups are best choices for all seasons.

All along long-boiled soups are very popular with the families. They think that such soups have a strong flavour and can have a moisturizing effect on the body. However, there are recent views that long-boiled soups do not have much nutrition value and they often have too much fat and sugar. It is because only a small part of the nutrition of the ingredients are dissolved into the soup and most of the nutrition is left in the remains of the ingredients. If you just drink the soup without eating the remains, you do not actually take in much nutrition. So what kind of soups would be a better choice?

The ingredients are put into boiling water and boiled for half an hour or so. The ingredients will retain its original colour and flavour and usually melons in season, sliced meat and fish are used. This kind of soup is suitable for all seasons.

More time is required for stewed soups. The ingredients and water are put inside a stew pot. A lid is tightly placed above it and the soup is stewed over water. This reduces the water evaporated and the original juice and flavour can be retained. The ingredients used are usually meat, chicken, dried seafood and herbs. Stewed soups are especially suitable for consumption in autumn and winter and they can strengthen the body.


We need to have a balanced and proper diet. Provided that we do not consume a huge amount of soup every day, there is no cooking method for soups which is absolutely preferred or not preferred. When we drink soup, we should note that babies should avoid drinking soup which is too greasy. Children and young adults have better metabolism and so they can consume more soups. For the middle-aged and elderly, they should only consume soups of a suitable amount.

Some people may want to know whether it is better to drink soup before or after a meal. Some people think that if you drink soup before a meal, the nutrition of the soup can be absorbed easily by the stomach. It can also increase the sense of fullness and hence can avoid eating excessively. For people who are on diet, if they drink soup before a meal, this may reduce their intake of food. However, since young children may easily be full, they may not be able to eat more after drinking soup. So it would be better for them to drink soup after a meal. For those with a poor appetite, if they drink some soup first, this can moisturize their mouth, throat, esophagus and stomach, hence helping digestion and absorption. 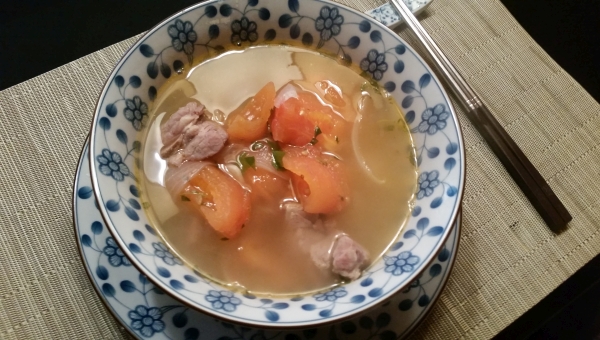